‘Your Houston News’ Writes About IBC 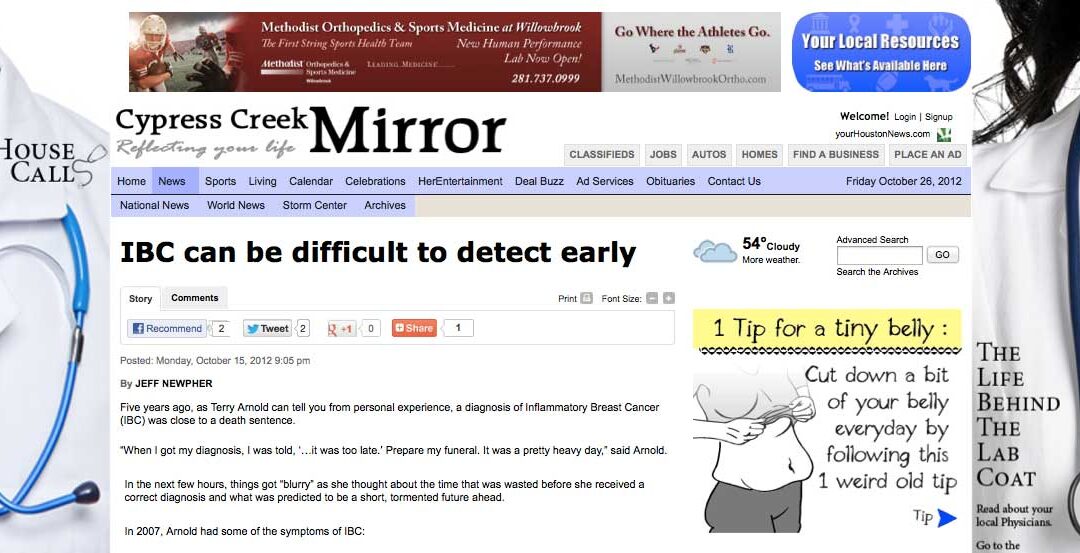 IBC can be difficult to detect early.

Five years ago, as Terry Arnold can tell you from personal experience, a diagnosis of Inflammatory Breast Cancer (IBC) was close to a death sentence.

“When I got my diagnosis, I was told, ‘…it was too late.’ Prepare my funeral. It was a pretty heavy day,” said Arnold.

In the next few hours, things got “blurry” as she thought about the time that was wasted before she received a correct diagnosis and what was predicted to be a short, tormented future ahead.

Breast swelling and one breast is suddenly larger than the other.

Breast that feels warm to touch and may look infected.

A dimpling of the breast skin that looks like an orange peel.

Thickening of the skin.

Swelling in underarm or only on one side of neck.

She went to the doctor and was told she had an infection.

“I was given a low dose antibiotic. It was clearly getting worse. I knew something was wrong. I was bounced around from specialist to specialist for almost four months. No one was thinking breast cancer.”

IBC is extremely different than most other breast cancers. It hides from the usual early detection methods, such as mammograms.

IBC often doesn’t produce a lump, as in Arnold’s case, “You can’t know you have it until you are in Stage Three.”

Eventually she got the news: IBC and the prognosis of no more than 18 (sickly) months to live. Arnold also learned that IBC is the most fatal of all the breast cancers.

She became the focus of conversations to decide whether she was a candidate to be a hospital patient or headed to hospice.

“My main concern was, was there any way they could learn something (from) me to maybe protect some other woman?”

M.D. Anderson doctors gave her a longer life expectancy. She would likely survive with IBC for two, two and a half years. The most she could hope for was five years.

After she finished six months of chemotherapy, had a double mastectomy and six weeks of radiation, she tried to resume her life.

In 2012, five years after diagnosis, Terry Arnold went off the end of the charts, beating all of the odds.

At first, she said theology plays into why she feels like she survived, but she really doesn’t have any solid answers why she is part of the 40 percent of IBC patients that survive this long.

With many other breast cancer treatments, if you make it five years, you’re “clear.”

“With IBC, you finish your treatments and they test you constantly to see if the cancer has come back. If it comes back and you were at Stage Three like I was, you are now at Stage Four,” Arnold said.

One of the reasons you don’t hear so much about IBC compared to other cancers? Many patients don’t make it past the first recurrence.

Also, they don’t have the same optimism as other cancer survivors.

“You don’t ever feel like you’ve turned the corner. You’re tested for the rest of your life.”

Arnold is working hard to try to share her IBC story and help others.

“I do feel a strong responsibility to give back as much as I can and to educate and help other women.”

She is personally helping other Friendswood women in their struggle. She is creating awareness. She is funding clinical trials, “… since rare cancers don’t get funding.”

She is neither a hospital or hospice patient.

She has founded the IBC Network Foundation and is spreading the phrase, “No lump, still cancer” to the world.