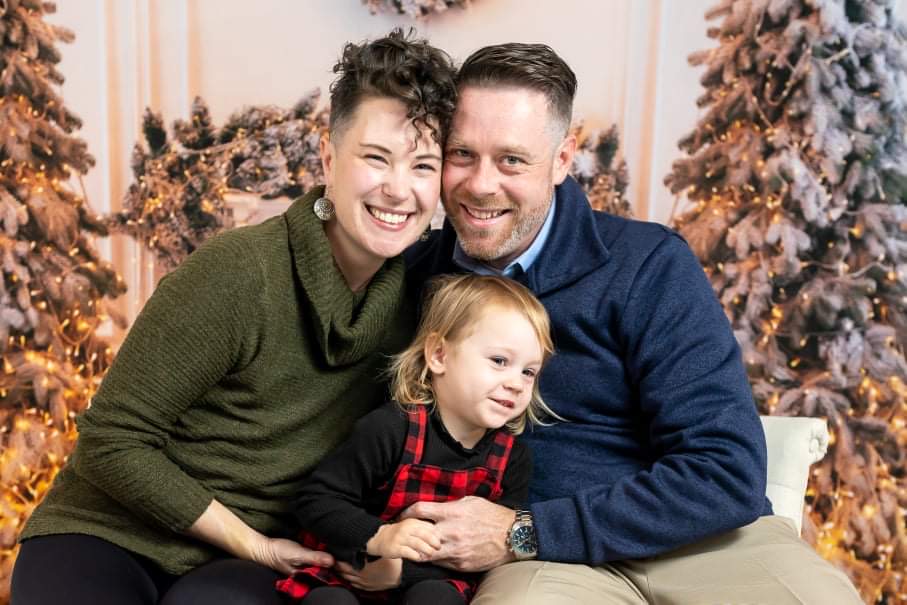 Stephanie was diagnosed in 2019 at the age of 35 and is currently NED. She credits her family and friends for getting her through treatment. They drove or flew in to help, the meal train setup by her coworker and the donations. And of course, lots and lots of prayers.

Here is her story:

I had my first child a beautiful baby girl in February of 2019. Life was complete and I was gloriously consumed by motherhood and loving every exhausting second of it. So when the fatigue turned into a swollen, hard breast that wasn’t getting better in July 2019, I knew something was wrong. Google told me that based on every symptom I had listed that I either had a bad case of mastitis or inflammatory breast cancer. I was presenting with orange peel texture, rock hard breast, inverted nipple, and a bruised rash at the top of the left breast. I had a wedding to go to out of town at the beginning of August so I pushed off visiting a PCP until mid-August. At this point I had tried massaging, power pumping, drawing out the clog nothing was giving me any relief.

When I finally made it into the doctor I saw a new doctor based on availability. She rushed through my appointment and looked down my shirt without examining the breast and sent an antibiotic to the pharmacy. Within 12 hours of starting the antibiotics my breast began having shooting pains that felt like needles in the breast. I couldn’t sleep and all I could do was cry because something had to be wrong this just wasn’t right.

A close friend from my home state encouraged me to go to a breast specialist and I made an appointment to see one the following week. This breast specialist examined me and his face changed when he touched the breast in question. The skin felt like leather so he issued a mammogram and ultrasound stat. I went the next morning to have these scans done. The radiologist and my doctor concluded that I absolutely did not have breast cancer however I had a breast abscess brought on my mastitis that was infected and I needed an incision and drainage the following Monday which was four days later. I went in for the operation under general anesthesia and the surgeon informed me that while he was putting the drain in he took two “chunks” for biopsy which he said was standard as a precaution. My post-op was scheduled for 10 days later and I was to continue antibiotics until my post-op appointment which would put me at 3 1/2 weeks of being on antibiotics to clear up the supposed infection.

That following weekend was Labor Day weekend and the pain became excruciating late Saturday night so we called the on call surgeon because I couldn’t get off the bathroom floor. The on call said to put cabbage leaves in my bra to help and called me in a stronger pain killer. Nothing was working and I had a feeling in my stomach that told me something was very wrong and I told my husband this over and over.The day before my post-op appointment I called to see if the breast surgeon could see me sooner as my symptoms were getting much worse and I was needing to seek a second opinion to get to the bottom of this. The nurse told me that the surgeon had just called to see if my pathology was in from the biopsy and it wasn’t back yet so he didn’t want to see me until the report was back.

The next day the nurse called to say that the breast surgeon had surgery at my appointment time so I needed to come in a few hours earlier. We arrived early and waited. Once the breast surgeon arrived I was ready to give him the business for not fixing my pain and not knowing what he’s doing. But the look in his eyes caught me off guard and I waited as he started to tell us why he wanted to see me earlier. Doctor: “It’s cancer” Me: “It’s inflammatory breast cancer isn’t it?”Doctor: “Yes and it’s very aggressive and fast growing so you need to act fast”, I didn’t hear anything else he said. The air has been sucked out of the room and breathing was difficult. I’m 35 years old, I have a baby, no family history. This was a death sentence. I had had already googled prior and knew what google said about inflammatory breast cancer outcomes. I’m going to die.

The next day I met with a local oncologist referred by my breast surgeon. I would be getting a port on Monday and then chemo right away. But we paused because every person we called the night before kept asking about MD Anderson and my husband had heard that there was an inflammatory breast clinic at Mays clinic at MD Anderson. It took many phone calls and appointment arranging but they were able to secure me a spot at the Morgan Welch IBC clinic the following week. I had stage 3B inflammatory breast cancer with a grade 3 tumor. My subtype was ER+ PR-HER2+ and I had significant axillary lymph node involvement.

I met the multi-team and immediately knew that they would work tirelessly to keep me alive. I enrolled in a clinical trial that day. I endured neo-adjuvant chemotherapy alongside a clinical trial drug for 6 months and then had a breast MRI before surgery to determine how much the tumor area had shrunk including the lymph nodes. This showed that in the non-IBC side a lobular tumor stage 1 had appeared somehow which led to me having a bilateral mastectomy in March 2020. On the IBC side I had a non skin sparing mastectomy and axillary lymph node dissection and on the other side just a mastectomy and sentinel node biopsy that came back all clear.

My pathology report was the most difficult appointment I had with my oncologist. Sure the cancer diagnosis was a huge blow but there was still so much unknown and hope that I could have a complete response to chemo and possibly have a longer life than I initially thought. The pathology revealed that I had a partial response to chemo and I had residual cancer in the breast and in several lymph nodes. I was broken. This was the end.  I cried nonstop for 24 hours. I took that 24 hours to feel sorry for myself.

I started adjuvant chemotherapy the next day and started stretching to get my body in position to start twice a day radiation. My mindset changed to mind over matter. If you’re going to believe that you’re just going to die than you probably will. But what if I live? I completed radiation, adjuvant chemotherapy, and am now on an anticancer drug that is specific to my subtype as well as hormone blockers for many years to come. I am at very high risk for cancer to invade my body again. If it does I will fight it with everything I have and every drug available to me.

There are so many things that I don’t have any control over but also so many things that I do. I’ve chosen to put my trust in the Lord, eat a cancer preventative diet, move my body every day, eliminate toxins from my everyday life, and find joy in this journey that I didn’t choose but that is now my life. I network with other survivors and patients to offer them someone to talk to that knows what they are going through and being a part of a tribe of women who lift each other up and offer hope to each other with a seemingly hopeless disease. I fundraise to help research labs with clinical trial needs and equipment. I don’t ever want to look back and realize that I wasted so much time worrying about dying that I forgot to live.

Her advice to those with IBC:  “Allow yourself a day or two to grieve but don’t stay in the grief. You need that power to fight.”

Thank you Stephanie for sharing your story!