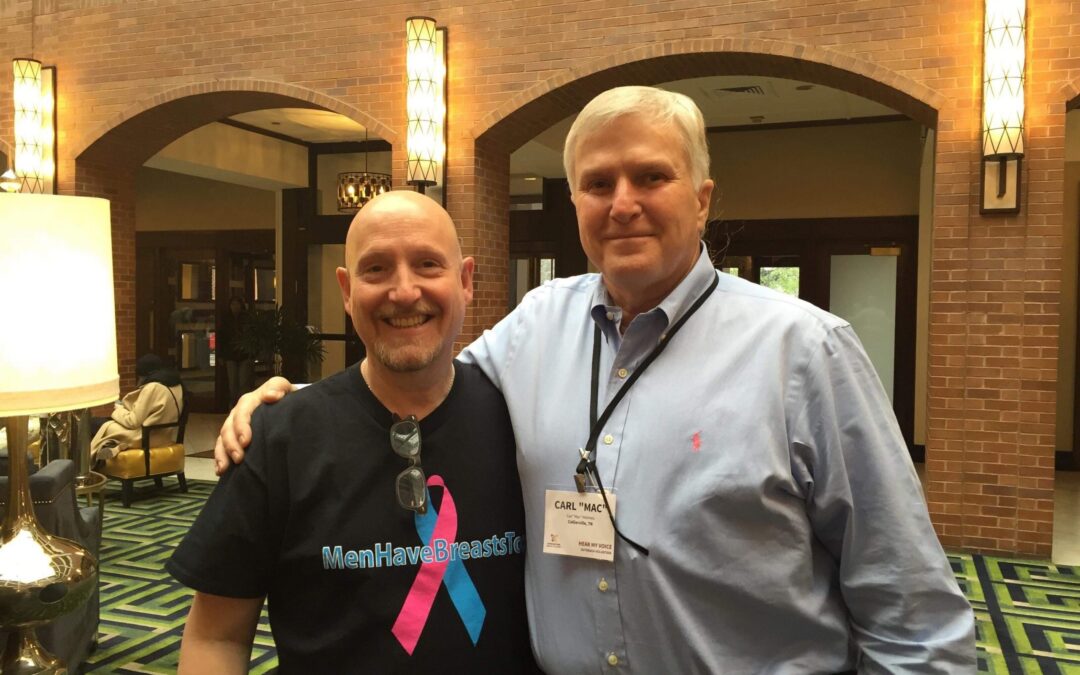 When people think of breast cancer, their thoughts almost certainly turn to women. Women are taught from a very young age to check themselves for lumps and to get annual mammograms after a certain age. Literature on breast cancer is found in most gynecologist and primary care doctors’ offices, with instructions and resources for women looking for education or healthcare. When people think of breast cancer, it’s unlikely they think about men. But nearly 3,000 men in America will likely be diagnosed with breast cancer this year. (American Cancer Society.)

In 2010, Michael Singer had been experiencing discomfort under his left nipple for some time.  “I had been ignoring it,” he said. “I assumed it was just a fatty cyst similar to one I’d had removed several years prior with no complications.” When he mentioned it months later at his physical, his doctor was concerned enough to order a biopsy. When he met with his surgeon after the biopsy, he was shocked at what he was told.

“I was informed a 2.2cm tumor was removed and it tested positive for cancer,” he said.  The diagnosis was Invasive Ductal Carcinoma and Ductal Carcinoma in Situ. “I was floored and did not understand what was happening, as I had never heard of men getting breast cancer. My wife was already in tears and I asked her to tell me what the doctor was saying. She looked me in the eyes and said, he’s telling you that you have Stage Two breast cancer.” He was scheduled for surgery five days later.

When Michael and his wife Patty went home, they tried to research male breast cancer online, but were unable to find any information. “There was nothing,” Michael told us. “No information, no support groups, and none of the major cancer organizations were talking about it. I felt like a freak. I told my wife not to tell anyone. When I did talk about it, I told people I had chest cancer.” Michael had lost his sister to breast cancer only two years before his own diagnosis. By the time she was diagnosed, the cancer had metastasized, and she died less than a year later. “My only experience with breast cancer was losing my sister,” he said. “I thought I only had a year to live. I didn’t know breast cancer was survivable.”

In addition to being shocked he even had breast cancer was the marginalization he felt during treatment. “The first time I went in,” he said, “there were all these women there wearing paper smocks. A lady came over and told me I had to wait further down the hall, since the sign said Women’s Waiting Area Only. I thought, wow, I already feel stigmatized enough that I have breast cancer, now they’re  going to segregate everyone? These women were wearing more than they would have at the beach; no one was exposed. When I told wife about it, she said from here on in, she, my mother-in-law and I would all schedule our mammograms together. We turned it into a social event and went out afterward. I called it my man-o-gram.”

Michael’s left breast was removed, and his doctors told him he didn’t need chemotherapy or radiation. When I asked if he had reconstruction – since women are usually offered reconstruction if they are a candidate for the procedure – he said, “You know, nobody ever mentioned it. It wasn’t even an option. Also, no one suggested taking the other breast. At this point, I wouldn’t do reconstruction, since I’ve been without it for years, but if I had been given the option to take the other breast as a preventive measure, I probably would have.”

Dan (name changed to protect privacy) had a lump on his left breast that he thought was a bruise from working around the house. When it didn’t seem to subside, he asked his wife to take a look at it. She advised that he should see his doctor right away. He got the news two days before Christmas that he had breast cancer. In February he had a mastectomy to remove the lump and his left breast, followed by six months of chemotherapy.

When asked what kind of emotional support was offered, he said he was offered counseling during his chemotherapy treatments but declined it. “No one really provided any direction or information about support groups,” he said,  “but I most likely would not have attended any support group anyway. I have little free time, and didn’t see the benefit it would offer me.”

When I asked him if he felt he was treated differently than the female breast cancer patients, he says no. “I was lucky that my personal doctor had a previous male patient who had breast cancer,’ he told me, “so he was very, very pro-active with having me checked out right away – the same day in fact. I would say the only folks who may feel uncomfortable are the woman who I see when I visit my surgeon’s office, or go for yearly mammograms. They very well may feel uncomfortable, but I’m fine with it.”

When Robin Holmes’ husband Mac had a biopsy due to an inverted nipple, the robes in the imaging center for women didn’t fit him, and, like Michael,  he wasn’t allowed to wait in the waiting room. “He was told to wait in the bathroom because he would make the women uncomfortable,” she said. Mac didn’t seem bothered by being asked to wait in the bathroom, but she was annoyed. She started noticing other ways her husband’s cancer was being “gendered,” as she called it.

“He had to fill out forms that asked when his last menstrual cycle was, and if he was breastfeeding,” she said. “After treatment he got a letter reminding him to schedule a Pap smear. I would get phone calls for “Mrs. Holmes” and they would start discussing his treatment. I would have to tell them they were looking for my husband. It was like they hadn’t even looked at his chart. I would go to conferences and every presenter there would refer to breast cancer as a women’s disease. How can researchers understand a disease that impacts all sexes if they refer to it as a disease that only affects women?” Like Michael, Mac started referring to his breast cancer as chest cancer because of how marginalized he felt, but like Dan, he wasn’t interested in talking it out with a support group. Robin said, “He just wanted to get it over with.” Michael, on the other hand, said he would have loved to have known of a support group, but there didn’t seem to be any.

When Mac became metastatic, Robin wanted to know more. Conferences were starting to address male breast cancer, but it was always referenced as being rare. “I wish people would be more careful when using the word “rare,” she said. “Yes compared to women’s breast cancer, breast cancer in men is rare, but it still occurs, and seems to be on the increase. There are actually more men that die of breast cancer than testicular cancer. When we tell people it’s rare, it sends a message that it won’t happen to them, and they don’t need to know about it. I hope that researchers at conferences will understand this is an issue.”

I asked Michael if he had heard that more men die of breast cancer each year than testicular cancer. “I can’t confirm that, but it wouldn’t surprise me,” he said, “Think about it – men go to their yearly physicals and know the doctors are going to check their testicles and prostate. How many men go to their doctor expecting them to feel their chest? How many doctors ask if they look for lumps in their breasts? There are signs – lumps, inverted nipples, nipple discharge,  redness, and swelling. Men who get these symptoms aren’t automatically thinking about breast cancer. So it wouldn’t surprise me if more men die from breast cancer because they’re not aware of the symptoms, or they’re embarrassed or wait too long to get it checked out, and by then it’s too late.”

Both Michael and Robin are pleased that their efforts seem to be having a positive effect. Medical conferences have started addressing male breast cancer, and some hospitals have already made their forms male friendly. There is now a wealth of information online and men diagnosed with breast cancer have many more resources than Michael did in 2010. They both say, however, there is a lot of work to be done. “I still meet doctors and nurses who have never had a male breast cancer patient, much less met a survivor,” says Michael.

Michael now travels the country with The Male Breast Cancer Coalition, which seeks to raise awareness and provide education about male breast cancer. He was instrumental in getting Governor Cuomo of New York to sign a procolatomation declaring the third week of October is Male Breast Cancer Awareness Week.  He speaks at conferences, schools, and to anyone who will listen. I asked him what kind of reaction he gets at these events.

“People are shocked,” he said. “When men come up to my booth with the Male Breast Cancer Coalition sign, they tend to reach up to their own breasts out of surprise. They feel awkward. Many of them look at our banner and keep going. I recently went to survivor’s luncheon and was wearing my “Men Have Breasts Too” shirt, and a woman walked past, laughed, and said, “That’s funny!” I said, “What’s funny about it?”  She thought I was still joking. I told her I was an 8 year survivor of breast cancer. She was stunned. She said, “I’ve never heard of male breast cancer.”  I said, “That’s why I’m here.”

Memorial Sloan Kettering: What You Need to Know About Male Breast Cancer: https://www.mskcc.org/blog/what-you-need-know-about-male-breast-cancer

For more of Michael Singer’s story, with links to further resources: https://malebreastcancercoalition.org/Survivor%20Stories/mike-singer/