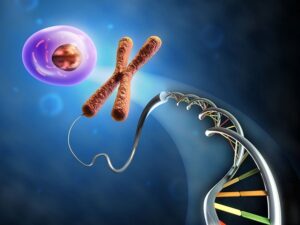 When a healthy cell is damaged, there are two paths it can take. The first is a rapid quest of survival and repair, the other is cell suicide called apoptosis to prevent passing on “flawed genetic information”. PARP1 (poly[fusion_builder_container hundred_percent=”yes” overflow=”visible”][fusion_builder_row][fusion_builder_column type=”1_1″ background_position=”left top” background_color=”” border_size=”” border_color=”” border_style=”solid” spacing=”yes” background_image=”” background_repeat=”no-repeat” padding=”” margin_top=”0px” margin_bottom=”0px” class=”” id=”” animation_type=”” animation_speed=”0.3″ animation_direction=”left” hide_on_mobile=”no” center_content=”no” min_height=”none”][ADP ribose] polymerase 1) is an enzyme that is activated by DNA damage and works with proteins to help in the cell repair.

“Many standard cancer treatments, including many chemotherapy drugs and radiation therapy, damage the DNA of rapidly dividing cancer cells. If PARP is able to help repair the damage caused by these agents, tumor cells may be more likely to survive and grow.”

It is suggested in recent clinical studies that using PARP inhibitors along with Chemotherapy and radiation is more effective. When PARP inhibitors are exposed to cancer cells, they drive the cell in the path of apoptosis (cell suicide) by preventing the protein from responding due to DNA cell damage.

Please read the entire article and take a look at the diagrams and images at the National Cancer Institute below.