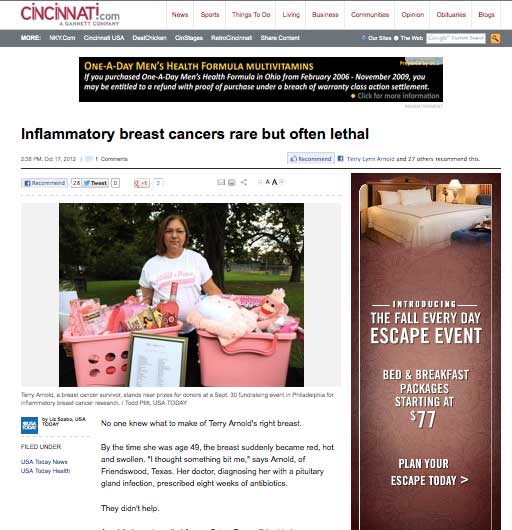 No one knew what to make of Terry Arnold’s right breast.

By the time she was age 49, the breast suddenly became red, hot and swollen. “I thought something bit me,” says Arnold, of Friendswood, Texas. Her doctor, diagnosing her with a pituitary gland infection, prescribed eight weeks of antibiotics.

Arnold’s breast swelled from a C to a D cup. “I had to buy a new bra, and pad my clothes to even them out,” she says.

Months went by, and Arnold saw five doctors. Some of their explanations were stranger than others.

“One doctor said, ‘You have menopause in one breast,’ ” Arnold says.

Eventually, Arnold arrived at Houston’s M.D. Anderson Cancer Center, where she learned she had inflammatory breast cancer, or IBC, the most aggressive form of the disease. IBC takes its name from the red, inflamed condition that it produces in the breast, caused when microscopic tumor cells clog up lymph vessels.

Like most women diagnosed with IBC, Arnold had never even heard of it.

Today she tells her story often, both to educate women and doctors about a tumor that few recognize, as well as to raise funds for an “orphan disease” that gets relatively few research dollars.

Although these tumors are rare, accounting for only about 4% of breast cancer cases, they are often lethal, causing perhaps 10% of the 39,500 annual deaths from breast cancer in the USA, says Naoto Ueno, executive director of M.D. Anderson’s inflammatory breast cancer research program and clinic. The median survival for women with IBC is less than three years, says Massimo Cristofanilli, chairman of medical oncology at Fox Chase Cancer Center in Philadelphia and a leading expert on inflammatory breast cancer. About 35% to 40% of patients have metastases to other organs when they’re diagnosed, and 20% to 25% have metastases to their brain, Cristofanilli says.

“The vast majority will die,” says Cristofanilli, who was Arnold’s doctor at M.D. Anderson. In addition to her swollen breast, Arnold had cancer in 13 lymph nodes in her neck when she was diagnosed.