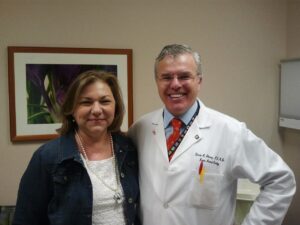 I used to wonder if doctors at large hospitals like MD Anderson remembered their patients. Did they ever look up from the charts, tests, and body exams to see the face of the person they were treating?

Since patients come from all over the world, it seemed like it would be an impersonal relationship. That is, until I met Ricardo H. Alvarez, M.D., The University of Texas MD Anderson Cancer Center, Houston, TX

When I met Dr. Ricardo Alvarez, I had already been through a year of cancer treatment for triple-negative inflammatory breast cancer (IBC). You would have thought I would have been nervous, but I wasn’t, I felt confident. I had been happy with my prior oncologist, but he moved across the country. So, I had to make a change too.I was grateful, I had finished my almost yearlong cancer treatment plan prior to his departure because our bond was strong. I trusted him completely.

During the past year, I had received twelve weeks of neoadjuvant chemotherapy with Taxol and four weeks of fluorouracil, epirubicin and cyclophopsamide. Because both of my breasts had cancer, I had a double mastectomy. After the surgery, I received six weeks of radiation therapy once a day. The follow-up with IBC was demanding because the disease is known for a fast recurrence. Even though I was viewed as No Evidence of Disease (NED), I required special monitoring that might or might not include PET or MRI’s as well as blood work every few months.

After my first year of treatment, I wondered if I could trust another doctor as much as I had my first one.

Back in the waiting room, I was face-to-face with the “new guy” and he was looking at me, curious. He did a double-take. “Can I help you?” he said after a quick glance around the room. “Did your friend have a question she forgot to ask?” I laughed. “No, all is fine,” I said. “I’m here for my appointment now.” I explained that we had met earlier that day. I had been in an appointment with him a few hours early, accompanying another IBC patient to her first appointment. That patient had first been told the physical changes in her breast were normal and not to be concerned. She was scared. She had found me on an IBC support group and asked if I would come with her to her first appointment. As it turns out, we both had appointments with Dr. Alvarez for the first time, on the same day, just a few hours apart.

Dr. Alvarez and I discussed my needs as a triple-negative inflammatory breast cancer survivor. We also discussed the close contact he wanted with me as I was going to be the best judge of my body changes. To be honest, I’m not sure how much I was listening. I was thinking about how he treated the woman I was with in the earlier appointment. I watched him walk her through her treatment plan, removing her fears, and giving her hope. He patiently answered all of her questions, never dismissing her concerns. As I watched the two of them together, I remember thinking that she and I would both be fine. And, for now, we are.

I was with my new friend the day she rang the bell at MD Anderson, signaling the end of her cancer treatment, and she too is now NED.

This article was first published as a guest post on MD Anderson’s Cancer Wise Blog.   http://bit.ly/13WPzPZ