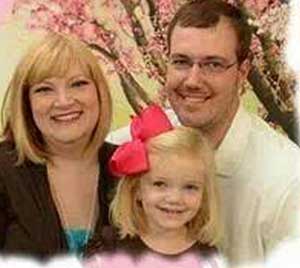 The David and Heather Ryan FamilyI got the call, “…she will not last much longer, I just wanted you to know”.  The drive from Friendswood, Texas to Tuscaloosa, Alabama is long, 9+ hours.  I got there as quickly as I could, but it was too late.   I sat in a parking lot in some little dirty gas station and cried.  Within seconds a friend called me, telling me she had heard of Heather’s passing.  Then she asked a question, “What are you going to do now?”  I told her I didn’t know. “To turn around and head back home seems hollow, but to go forward…” She said, “you still need to go,” she said something that really rang with me.. “You are not the type of person that turns around.”  I am glad she called.  I wanted to hug Heather one more time, and I didn’t get to, but there were others I hugged, giving and receiving love.

Little did I know what else would happen on that trip.   I had some literature with me in the car about Inflammatory Breast Cancer, (IBC) the disease that took Heather. I stopped at a college bookstore, near the university she worked.  I asked if I could drop off some handouts on Inflammatory Breast Cancer.  The clerk was nice, explaining the university had some awareness campaigns started.   I asked if she had ever hear of Inflammatory Breast Cancer.  The one without a lump, that often strikes younger women?  At first she said no, she had not hear of it, but I could tell the “no lump” wording got her attention. “Oh wait, I have heard of it.  But it is really rare, so it never really happens”. I said, “Well, it happened to me.  I have Inflammatory Breast Cancer.”  Her eyes changed, I saw a flicker of fear. I guess my Texas twang gave me away from the local accent of Alabama, thick and sweet like honey, because she said, “Well, yes, I guess it does happen, but you are not from around here, are you?”   I replied, “No, I am not from here but would it matter to you if someone in your area had this, like a neighbor?”  She quickly nodded.  Then I told her about Heather, the wife of the restaurant owner next door, who died yesterday from IBC at the age of 32.    She grabbed the literature, with a heighten interest and read it carefully and thanked me.

I shared this story with some of my friends.  Sisters I call them, others who also have IBC.  We don’t think we are rare.  We think we are under-reported, and sadly, so many are lost, so quickly, so young. Like Heather, the story is not told.  Then we had an idea.  We are all Heather.   There are so many of us, with this disease, this orphaned form of cancer, and we want the world to hear us.   To hear about her.

Would you like to tell someone about Inflammatory Breast Cancer?  We would love to see others living with IBC share.

Join in, the “Who Is Heather?” Campaign

Take a photo, with your sign, just three lines,

First line: Who Is Heather?
Second line: Wife & mom. Proud Alabama grad. Died of IBC at age 32.
Third Line:  (for people with IBC) I have IBC too. (For people who knew Heather) Heather was my friend.
Last line: theibcnetwork.org   No lump, still cancer.

And share it, share this story. Also share your photo with us, so we can see you and update you on the second step in this campaign.

Email it to terry@theibcnetwork.org  tweet it to us, or #whoisheather and we will find it.

Thank you, and even through tears, hope always, Terry