Fertility, Pregnancy, and Childbirth with Cancer 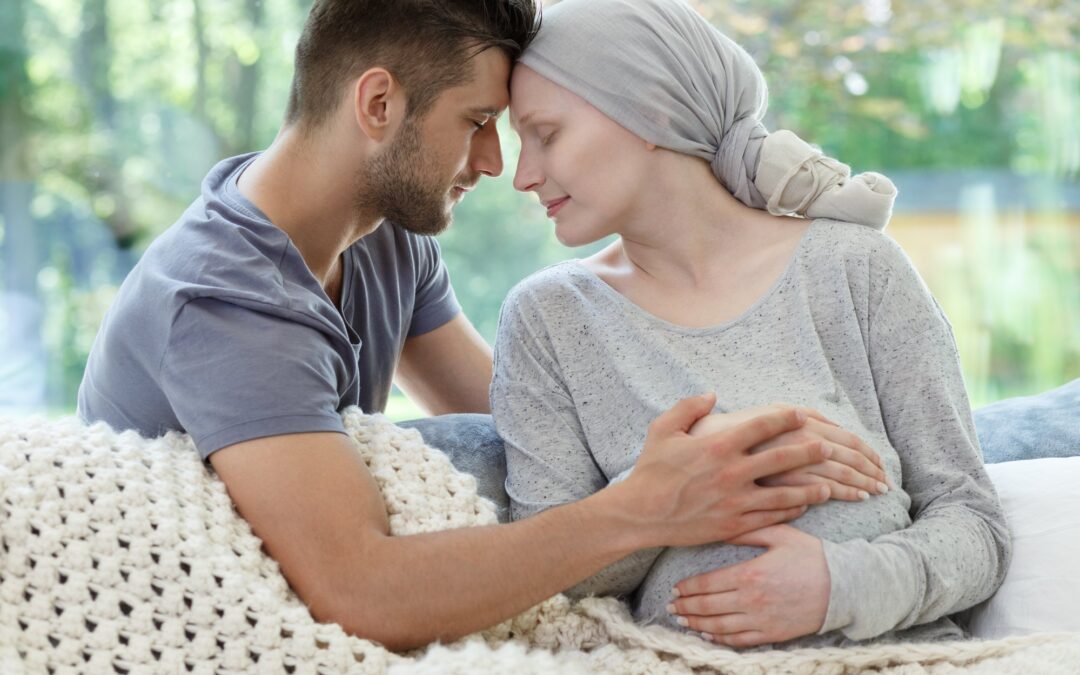 Fertility, Pregnancy, and Childbirth with Cancer

No one ever said pregnancy or parenthood was easy, but how do you deal with cancer on top of it all?

According to the American Cancer Society, many women are able to become pregnant after cancer treatments, but there are some treatments that make pregnancy difficult to achieve. While cases vary, and it is always best to discuss your options with your medical team, it’s important to know there is hope.

Nancy was diagnosed in 2000 with breast cancer at age 41. A newlywed at the time, she had a lumpectomy and 37 rounds of radiation.  “Because it was diagnosed so early,” she said,  “it was felt that chemo was not necessary.  Some doctors wanted to do mastectomy but I knew that was the wrong treatment; as did other doctors.  Obviously 19 years later those docs were correct.  I had been getting mammograms since I was 30 years old when my mother was diagnosed. Following treatment I was told to go ahead with my plans to become pregnant but I needed to let my body rest a while before hitting it with another blow.” Almost a year to the day that she was diagnosed with cancer, Nancy learned she was pregnant,  and at age 43 gave birth to a healthy baby girl.  Now grown, her daughter received such high ACT scores she was recently offered a full tuition scholarship to Julie’s alma mater.

Nancy has been successfully treated with no recurrence or new occurence in 19 years. While she did have an oopherectomy after a scan showed a suspicious area (it turned out to be nothing) there appears to be no reason to do a mastectomy.

Julie was already going through infertility treatments when she found out she was BRCA1 carrier. Since many women in her immediate family had had ovarian cancer, she had a prophylactic oophorectomy at age 40. Unable to conceive before removing her ovaries, she adopted.

I asked if the adoption agencies she worked with were hesitant due to her BRCA mutation.  “We adopted our older daughter before I knew I was a carrier,” she said. “I was only tested later, just before we adopted our second daughter. No one at the agencies objected, but people didn’t really know what that meant at the time.” Julie had her oophorectomy just before going to China to adopt her second daughter.

At the age of 55, Julie was diagnosed with uterine cancer.  “They caught it super early, at Stage 1A,” she said. She was able to have a hysterectomy without chemo or radiation, and the only surveillance she has to do is her annual Pap smear.

Laura was misdiagnosed as having clogged ducts the day her son was born. When he was eight weeks old, she was diagnosed with breast cancer. “I got a lot of, “Aww you have a baby and cancer…’ reactions but really there was no additional support or resources given. When meeting with the radiation oncologist I asked what my recurrence rate would be with versus without it because childcare was going to be a major problem.” She was told that because she had a high chance of recurrence, she should have radiation, and needed to make plans for childcare since her children would not be allowed in the room. “Finding a sitter every single day during radiation when they are only open the hours most people work really sucked,” she said.  She was in treatment (chemo, dmx, and radiation) from when her son was almost 3 months and is still finishing Kadcyla now. She also has a three year old.

Laura was able to breastfeed with her non-cancerous breast (the other one never produced) until chemo started. “That was one of the hardest parts, emotionally, for me,” she said. “I was lucky that my worst days from chemo timed out for the weekend and I made it through the others, tired but still able. My husband did have to come home early a few days to help.”

I was diagnosed with stage 2 Triple Negative Breast Cancer when her daughter was 6 months old. “I felt pretty supported,” she said,  “and honestly, I just wanted it gone and for me to live to raise my daughter so whatever they said I did. It was, however the deciding factor to not have any more children as I was terrified of it coming back. I tested positive for BRCA2.” When her daughter was five, she had a double mastectomy and total hysterectomy.

There are many cases of breast cancer patients who, because they were nursing mothers at the time,  were misdiagnosed as nursing conditions. Just as Laura was misdiagnosed with “clogged ducts” – a common issue for new mothers – many women who have Inflammatory Breast Cancer are misdiagnosed as having mastitis.

Inflammatory Breast Cancer presents with redness, swelling, feeling hot to the touch, and skin dimpling. Because of the similarities, numerous women who were given antibiotics for mastitis only to find out later they had IBC. If you are a nursing mother and suspect you have mastitis, be sure to see an oncologist to rule out IBC.

If you have already had cancer, or are going through treatments now, there are still options for parenthood. While some chemotherapy treatments can damage the ovaries, leading to infertility problems, this is not always the case. Women who have BRCA mutations or who have had cancer are still often able to become mothers through conception, IVF, and adoption. If you are concerned that a diagnosis could change your plans to be a parent, talk to your medical team about your options.